Mr. Uchral Nyam-Osor, Minister of Digital Development and Communications took up his duties

Mr. Nyam-Osor Uchral was appointed as the Minister of Electronic Development and Communications by Order No. 143 of the Prime Minister of Mongolia dated August 30, 2022.

Minister Uchral has been elected to the Parliament of Mongolia for the second time. He established a lobby group to support innovation and e-policy, and in 2018, he contributed to the establishment of the e-policy temporary committee for the first time in the Parliament. Also, in 2020, the newly formed Parliament established a standing committee on Innovation and e-Policy, and appointed Mr. Uchral Nyam-Osor as its Chairman. During this period, the Standing Committee on Innovation and e-Policy, together with the Standing Committee on Security and Foreign Policy and the Standing Committee on Justice, approved five laws to promote the development of the ICT sector. Specifically, the Law on Electronic Signatures, the Law on the Protection of Personal Information, the Law on Public Information Transparency, the Law on Cyber Security, and the Law on Virtual Assets were respectively approved. In the future, he expressed that he would work quickly to implement the 37 regulations and guidelines accompanying these laws, quickly deliver public services to the citizens, and reduce the corruption index. Also, information and communications technology sector require more specialized skills than other sectors. The government will not necessarily do all the work. He pointed that he would focus on outsourcing some of the work to the private sector and professional associations.

Received a Doctoral Degree in History (Ph.D) from the Siberian Branch of the Russian Academy of Sciences. 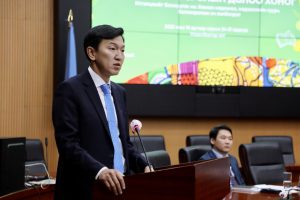 Affiliated of the Ministry of Digital Development and Communications

© 2022 MINISTRY OF DIGITAL DEVELOPMENT AND COMMUNICATIONS